Unbeknownst to all of us, there is apparently a Redditor who is starting to build his own electronic music gear. Posting photos to Imgur. Want an advantage over other musicians and to look really cool?

Iâ€™m starting an Alternate Musical Instrument S.I.G. in the Greater Vancouver area. It’s for those who want to gain a musical edge. Do you:
– really, hugely want to learn to play an instrument, but donâ€™t because the instrument is arcane or everyone else is musicians that started years ago
– are non-keyboard musicians: especially guitar players and sax players that want to play a keyboard but donâ€™t because the keyboard is so bloody confusing
– are mediocre keyboardists that want a killer advantage: an instrument that is much faster to play and has many more musical possibilities than the traditional instrument
– are composers that want composition-boosting (instead of confusing) instruments

This is a great time in the development of musical instruments. New, intelligently designed ones are coming out; we now have the Daskin (a modernized piano), Dualo Du-touch, Terpstra, LinnStrument and jammer keyboards. All of these are designed to be both easy to learn, fast to play and train the ear accurately. This is not hard – traditional instruments are not designed for any of these things. All of the new instruments have uniform, consistent fingering, that is, if you learn to play a song in a given key, you can play it equally well in all keys, and modulations are easy. Each has unique features.

If these new instruments sound scary-hard to learn, there is now available teaching software that multiplies musical learning speed and it works particularly well on the new gadgets.

The group purpose: to check-out these new instruments, share ideas, experiences and gain extra proficiency in music. This will be lots of fun & interesting.

“The makers of the innovative 2-D array AXiS-64 and AXiS-49 (sic) alternate Keyboard controllers will soon pull the plug on sales, after 5 years in an unexpectedly tough market.”

“This note is to (a) inform you of the existence of these units for a short while more, just in case you happen to need instrument(s) with 2-dimensional arrays of velocity-sensitive keys, and (b) I’ve persuaded the developers/investors in the Axis to tell us a little of their story, in http://www.musicscienceguy.com/2014/11/farewell-to-the-axis-keyboards.html”

“This posting may sober-up anyone that contemplates building a new instrument:”

“I’ve made extensive use of the AXiS-49 controllers, but not as they were intended: reprogrammed the key array; changed the orientation and recolored the keys. They were initially built around a harmonic-table key layout, but a firmware update allowed them to become flexible.”

“I personally believe their story would have been substantially different if they had made an instrument that generic from the start. Moral: target as large a customer base as you can. ”

I have no idea who was behind that thing. Well, now you have.

People do things with it. Like this and this.

Because we missed it the first time, Rasmus’s DIY MIDI linear multitouch controller:

Very nice, as Borat would say.

It appears that we are going into a dark period in electronic music. Meaning, if you can’t do it with an iPhone, it’s not worth doing. More and more iPhone music accessories and apps are pouring out.

The latest one, that is apparently winning awards despite not being manufactured yet, is the Artiphon. No doubt it’s very nice, expressive and cleverly designed. But it is also just another trendy iPhone attachment. Useless without the iPhone. If Apple goes under or stops making iPhones to fit it, it’s a dead product.

Not to mention Moog’s absurd new modular, an “exact duplicate” of Keith Emerson’s old system. Supposedly they want “at least $90,000” for one. Gordon Reid of Sound On Sound had a nerd fit.

Just hitting the market, looks much better made than most of the others, which tend to be plastic and flimsy.

He’s built a very impressive folding synthesizer. Plus, the “Colourbox“. 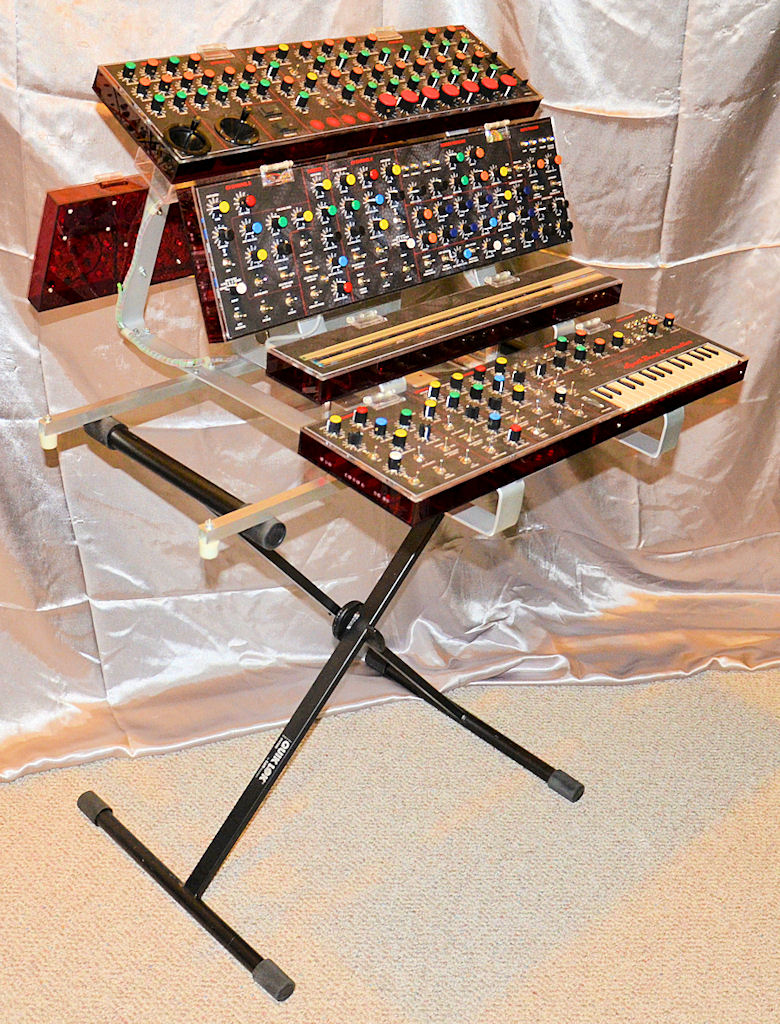 Kilpatrick has his own module format.

Announced last year. Almost totally ignored, except for one thread on Muff’s forum, containing much whining.

Kilpatrick is doing what all the others should have done from the beginning, goddammit:

* No power cables, the modules plug directly into a power backplane. Easy to install.
* Captive mounting screws that don’t fall out and get lost. With socket heads.
* 15v rails with ample current capacity. Each module has its own local regulation.
* Separate analog and digital grounds.
* Banana jacks, color coded.
* A consistent single 4U panel size. Sized for human hands. No Euro micro-panel weirdness.

And his prices are reasonable, which is nothing short of miraculous. About one-third of what Buchla charges for roughly the same capabilities.

He needs to aggressively market this, and just as important, he must encourage third parties to make compatible modules. Or it will fail. That would be very sad. Too much of the modular market is a garbage pit of stupid, repetitive, and cheap.

Now I’m really pissed off. Kept my mouth shut before, but no longer. Look at the little bastards, earlier in that thread, nitpicking and naysaying, despite having never actually seen or tried any of it. Muff, I keep telling you that your forum is too tolerant of trolls and idiots, and this is a perfect example.

It’s been announced all over the place: BBC (who stupidly call it a “sound system”), Synthtopia, Sonic State.

Predictably, it’s not yet in production, much less has a price tag attached — but already nerds are complaining about the price. Plus, the continued use of the aging MIDI protocol will limit its interfacing abilities to software or other synth electronics. I wish them luck, they’ll need it.

I almost forgot to mention the German made Endeavour controller. It, apparently, is actually shipping.

A new hunk of madness from Zerosum.

Completely different from anything Metasonix, Trogotronics, or anyone else has ever offered for sale before. Trust me.

How to make your own. (Warning: big job.)

After years of threats, the Therevox ET-4 is finally available.
And yes, it’s another Ondes-style controller.
(Unlike the French Connection, it has a built-in two oscillator analog synth. And $1475 is a bargain.)

All the way back in 1972, Tony Furse managed to get funding to build a polyphonic digital/analog synth. That was the Qasar.

He built precisely two prototypes–the finished machine would have been far too costly for the era, so no investors came forward. Tony persisted, though, and developed it into a primitive sampling machine with dual 6800 microprocessors (brand-new on the market) in 1978. That machine, the Qasar M8, eventually was commercialized as the Fairlight CMI. (More history here.)

It’s got a blog, it’s been mentioned on Gizmodo, Makezine has done a piece on it. They’ve been talking it up for at least 4 months. So when does it ship?

If you’re interested in one, go here and donate.